The Intergovernmental Panel on Climate Change recently published its Working Group II (WGII) and Working Group III (WGIII) Sixth Assessment reports. The former focuses on climate change ‘Impacts, Adaptation and Vulnerability’, highlighting key risks and disruptions caused by climate change, like floods, droughts, heatwaves, and biodiversity loss, and how these disruptions will increase with further temperature changes. The disruptions have particular impacts on agriculture – including livestock systems – with potentially material consequences for companies and investors. The latest Working Group III report released in April focuses on mitigation options, outlining the key role that the agriculture, forestry and other land use (AFOLU) sector plays in rising greenhouse gas emissions and in potential mitigation.

The most recent assessments paint a stark picture of current and future climate change impacts, referring to the widespread deterioration of ecosystems, and the planet’s declining ability to adapt to these impacts, while outlining relevant adverse socioeconomic consequences. Species loss and mass mortality events on land and in ocean ecosystems, some of which are irreversible, have already occurred. Adverse climate change impacts on agriculture and crop production are felt across all assessed regions. Between 1961 and 2006, yield losses due to droughts and changes in precipitation and droughts were estimated at 25%. Chapter 5 in the IPCC’s Working Group II report includes both food system impacts that have already been observed and projected future impacts.

Climate change has already affected livestock production, both directly through heat stress affecting animal mortality and productivity, and indirectly through effects on grassland, species distribution and diseases. The research quoted in the WGII report projects that by end century, extreme heat stress risk will increase for all livestock species in many regions of the world. These impacts will grow as global temperatures continue to increase. Cattle numbers in Nepal have already declined, attributed to increases in the number of hot days, whilst milk production in West Africa and China has also stagnated, and may be attributable to  increased periods of high daily temperatures.

The IPCC warns that as temperatures rise, on average animals eat 3 to 5 percent less per additional degree of warming, harming their productivity and fertility. These excessive hot days will be especially harmful to larger livestock – like cattle – in the tropics and subtropics. As an example, even warming of 1.5°C to 2°C will impede the ability of livestock to thermoregulate in the Caribbean, and will cause animals to persistently experience heat stress. Livestock is projected to face additional heat stress throughout the world, growing more severe as the world gets warmer. In fact, the USA, UK and West Africa are projected to lose up to 17 percent of milk production by the end of the century. The report also highlights that at just 2°C of warming, livestock numbers will decrease by 7 to 10 percent by 2050 resulting in 10 to 13 Billion USD in economic losses.

Finally, livestock could be vulnerable to more diseases. The IPCC notes that zoonotic diseases – illnesses that can jump between humans and animals – are more sensitive to climate change than human or animal-only pathogens. The ranges of disease-carrying insects and other arthropods will expand as the climate warms, whilst more extreme weather events resulting from climate change will also increase the spread of disease.

Research has shown that at the higher end of temperature increase projections, up to 34 percent of existing areas for crops and livestock production will be unsuitable by the end of the century. The areas which are most at-risk are regions where the world’s top livestock-producing countries are located such as Brazil, China and India.

Under the most extreme of the IPCC’s scenarios, consistent with around 4.3˚C in temperature rise, one-third of global food production could be pushed beyond the Safe Climatic Space (SCS) by 2081-2100.

Figure 1 : Extent of food crop production and livestock production that would fall within and outside the ‘Safe Climatic Space’ 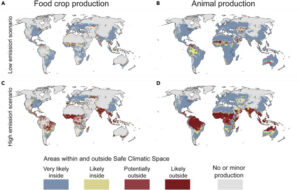 The figure above (Section D) shows the land used for animal production that would fall outside the Safe Climatic Space under a high emissions scenario (in red). This includes South America, the Sahel and Sub-Saharan Africa, the Arabian Peninsula, India, South-East Asia and Northern Australia. These overlap with regions where most animal meat production currently takes place – for example in South America, Australia and East Asia. There are strong overlaps with the identified ‘at risk’ areas and the global centres of production for different protein types:

Source: Based on Kummu et al. (2021), and global production data from OurWorldInData

In spite of these findings, when negotiating what to include in the WGIII’s Summary for Policymakers, big beef producing countries like Argentina, South Africa and Brazil opposed including a reference to plant-based diets in the report, with a preference for promoting the adoption of ‘balanced diets’ as a demand side measure.

Impacts on Animal Feed and Inputs

Animal production systems that depend on natural grasslands for food are particularly vulnerable. Climate change has already caused observable negative changes to grasslands in North America, South Asia and Inner Mongolia. The IPCC’s new Working Group II report also cites projections that 10% of the land area that is currently used for cultivation of major crops and livestock will be unsuitable by mid-century. These adverse effects of climate change on food production will be even more severe in scenarios exceeding 2°C in global temperature rise. Estimates based on current policy measures place the world on a path to warming of around 2.7°C.

A warming world also strains water supplies. Including animal feed production, livestock accounts for 30 percent of all water use in agriculture. Cattle are projected to consume 13 percent more water under 2.7°C warming while at the same time water supplies will be scarcer – potentially conflicting with direct human water use. High-input livestock systems may also consume more water than grazing or mixed systems.

Without adaptation measures, there will be significant losses to livestock feed crops over the 21st century, including declines of 2.3 percent per decade for corn and 3.3 percent per decade for soy. The WGII report suggests that throughout tropical and subtropical regions, beef and dairy production losses could be even worse, resulting in losses up to USD 9 billion per year for dairy and USD 31 billion per year for beef by the end of the century – approximately 7% and 20% of the global value of production of these commodities in constant 2005 dollars.

These physical risks of climate change could also create the risk of ‘stranded assets’ for investors, i.e. assets that at some time prior to the end of their economic life are no longer able to earn an economic return. As climate change affects profitability, it will become critical to analyse specific impacts in greater detail.

The Coller FAIRR Climate Risk Tool assesses the financial vulnerability of the 40 largest animal production companies to climate risks in a 2˚C scenario, and finds that companies with the highest exposure of profitability to climate risk are located in Africa, Asia and South America.

Mitigation and Adaptations Options in Food and Livestock Systems

The WGII report describes some adaptations that are already being put into use, ranging from specialised breeding and species switching to increased shade and ventilation. Overall, mixed crop-livestock systems like agroforestry show promise for their resilience to the changing climate, as the greater the agricultural diversity in a system, the greater the overall adaptation benefits.

The new mitigation report highlights the contribution of livestock and diets in overall AFOLU emissions, and the high mitigation potential of agriculture and demand-side measures. Specifically, the AFOLU sector has a high mitigation potential at a relatively low cost, with the highest potential coming from reduced deforestation in tropical regions. Tropical deforestation is strongly linked with livestock and soy production for animal feed, and because intensification of livestock production generally requires increased inputs leading to increased emissions, overall emissions may not decrease. Chapter 7 of the IPCC WGIII notes that ‘data also indicate increased productivity per animal for example, average increases of 16% in beef, 17% in pig meat and 70% in whole (cow) milk per respective animal between 1990 and 2019. Despite these advances leading to reduced emissions per unit of product (calories, meat and milk) … increased individual animal productivity generally requires increased inputs (e.g. feed) and this generates increased emissions’.

Diversification into sustainable protein production and diets high in plant protein is one way to reduce key risks. Chapter 5 of the IPCC WGII report suggests that alternative protein sources could lead to significant reductions in land use for pastures and crop-based animal feed. Chapter 12 of the WGIII report cites plant-based alternatives and cellular agriculture as possible transformative food system mitigation options with multiple co-benefits for animal welfare, land sparing, lowered risk from zoonotic diseases, pesticides, and antibiotics use.

The IPCC reports are a stark reminder of just how vulnerable agriculture and the food system as a whole are to the consequences of climate change. The reports also highlight the need for a rapid transformation of the food system, to adapt and shift to more sustainable and resilient production in order to reduce environmental impact while maintaining food security in the decades ahead. Meanwhile, the ongoing crisis in Ukraine and projected implications for food security have also exposed the vulnerability of the food system to external factors, and climate change impacts outlined in the IPCC reports could further exacerbate existing risks.