Global meat production doubled between 1988 and 2018. Consumption is projected to increase by around 14% between 2021 and 2030 – driven by Brazil, China and the US. While past growth has been attributed to higher-income countries, future consumption will be driven by low- and lower-middle-income countries.

Animal agriculture is an inherently volatile industry. Profits rely on unpredictable influences such as changing consumer preferences, price changes in key production inputs such as feed and energy, disease prevalence, and weather conditions. Global demand aside, these factors appear to be leading to increased uncertainty and rising operational costs, squeezing margins for animal protein producers and their supply chains.

A common feature of modern beef production is its vertical segmentation, contrasting with vertically integrated systems for pork and poultry. Cattle typically change hands a few times before they reach abattoirs, meaning supply chain visibility tends to be poor. Indirect suppliers usually breed and raise cattle and sell to direct suppliers, who fatten cattle until they reach slaughter weight.

The extent of this segmentation differs between countries. Most larger-scale commercialised beef operations are a combination of grass-fed and grain-fed. Beef cattle in the US, however, typically spend more of their lifetimes in feedlots, where they are fed grain to speed up their weight gain.

Grain-fed cattle make up more than 60% of US total beef production. In contrast, around 90% of beef cattle in Latin America and around 50-60% in Australia tend to be primarily pasture-raised. Cattle in these regions also spend less time in feedlots. In Brazil, cattle are moved from farm to farm, sometimes through multiple suppliers, where they are fattened on pastures before reaching slaughter facilities. In many instances the pastures are on illegally cleared land, driving deforestation rates. The meatpacker, Marfrig has around 30,000 direct and an estimated 60,000-90,000 indirect suppliers across the Amazon and Cerrado biomes, highlighting the complexity of these supply chains.

Driven by efficiency (e.g., Brazil has more than twice the cattle inventory of the US, but produces less beef) and environmental considerations, feedlots are gaining traction in both Australia and Brazil. The UK has also seen a growing number of intensive systems in recent years.

One of the primary reasons for the rapid growth of the chicken industry is its successful combination of various production stages into vertically integrated firms. Companies typically own or control every stage of production, from feed milling, breeding and hatching through to slaughter (the breeding stock is provided by external companies). As integrated producers, these companies typically use ‘contract growers’ – farmers working under contract – to raise the birds in closed, indoor barns. The larger egg producers also tend to be vertically integrated. This model allows producers to have greater visibility and control of different aspects of the business, such as biosecurity, vaccinations, food regimes and technology integration.

Typically, feed makes up the largest cost component for poultry and egg sectors – around 50-60%. For example, Cal-Maine, the largest US egg producer, states that feed represented 55-60% of total farm production cost in the last five fiscal years. Feed costs’ proportion of total production costs could rise further as the price of feed ingredients, primarily soy and corn, increase. With already tight margins, such elevated poultry and egg production costs could be overwhelming depending on how much costs can be passed on through higher prices. While consumers are less sensitive to price changes for eggs, and to a lesser extent, poultry, when compared with beef and pork, demand could waver if prices continue to increase. In Africa, egg prices rose by almost 29% per tray from the April 2020 bottom and September 2021 due to decreased supply from higher feed costs. The cost of a bag of chick and layer feed increased by 29% and 23% respectively, pushing many farmers to stop production. Sharp increases in feed costs, particularly soybeans, saw poultry prices in India increase by up to 50% between the lows of April 2020 and April 2021.

Meat producers rely on natural gas, diesel fuel and electricity in the production and distribution of their products, as well as carbon dioxide (a by-product of fertiliser production) used to stun animals prior to slaughter. Energy costs typically represent around 4% of total egg production costs, and 8% of broiler production, primarily from ventilation and temperature control inside the farms.

Although rising energy costs are not yet seen as material to global meat production, some farms are already feeling the impacts. For example, Spanish chicken producers have suffered rising prices of gas and electricity this year, with some expecting 30% increases in electricity bills. The UK’s largest poultry producer, Bernard Matthews, saw its farm energy costs soar by 450-550% in 2020-2021 and – coupled with increased feed costs and wages – the producer has warned of large price increases for consumers. In addition, UK suppliers of carbon dioxide temporarily halted production due to soaring gas prices, fuelling concerns about mass culls of healthy pigs and poultry, and resulting meat shortages.

Like the poultry industry, the pig sector tends to be concentrated and vertically integrated: just four companies control 66% of production in the US. Small farms have been increasingly been replaced by large Concentrated Animal Feed Operations (CAFOs). Companies in this sector are either fully vertically integrated, raising most of the hogs they process, or act as integrators, using independent growers or contractors to grow their pigs.

This system of farming is now standard in major pork-producing markets. China’s pork market remains much less concentrated than that of the US – the top four pork producers had a 7% market share in 2018 but the industry is undergoing a structural transformation accelerated by ASF. In 2018, the number of swine in large-scale farms surpassed those in small-scale farms for the first time, driven by biosecurity regulations.

The largest players in China have invested millions to expand production capacity and capture market share as the sector recovers, taking advantage of high pork prices and credit availability. The four largest pork producers are expected to be responsible for at least 85 million animals in 2022 from 38 million now, lifting the combined market share to 12%. For example, Muyuan Foodstuff is building the world’s largest pig farm, around 10 times the size of a typical US breeding facility.

Although China’s pork supply has recovered, demand has not returned to previous levels despite pork prices declining to pre-ASF levels in 2021. This suggests that the country has passed “peak pork”, with consumers switching to other animal proteins, such as beef. Chinese consumers are now also showing increasing willingness to try alternative proteins, which have seen significant growth in demand due to growing flexitarianism. According to Euromonitor China, the plant-based market in China may increase to $12 billion by 2023 from $10 billion in 2018.

Tepid demand has caused the shares of Asia’s largest pork producers to plummet, wiping out 2020 gains despite predictions that these companies would achieve better biosecurity to prevent further disease. Margins for most hog farmers have fallen; for example, the Chinese pork producer, New Hope Liuhe, faced its first loss in years in 2021. The fall in pig prices has put pressure on debt ratios as companies borrowed to fund expansion, with concerns that pork prices could fall below the cost of production.

Given the sheer size of China’s pork market, peak pork would have a ripple effect on global markets if demand does not rebound, especially major international exporters expanded pork capacity to meet China’s demand in the midst of ASF. 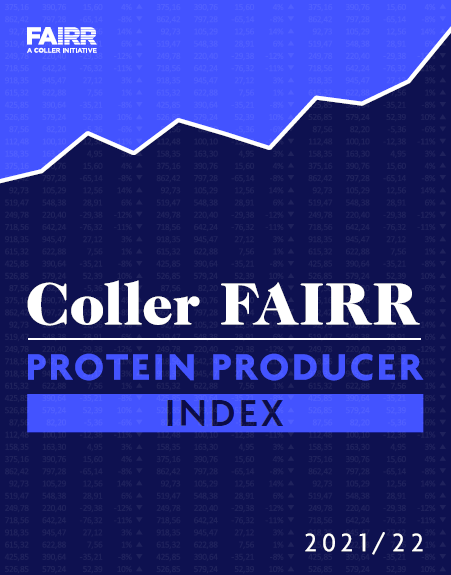 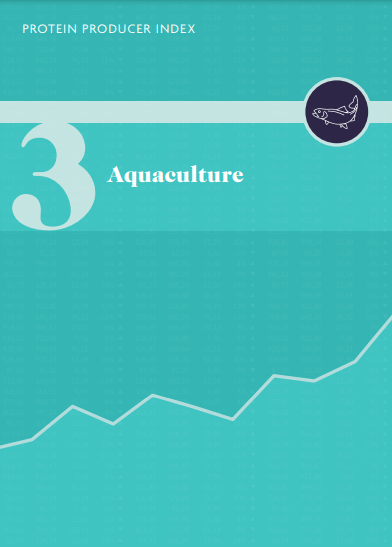 Thank you for your interest in Coller FAIRR Protein Producer Index. You will shortly receive an email with a link to download the Meat report. If you have not received this within the next few minutes, please check your junk folder.