The cultured meat industry is predicted to be worth $572 million by 2027, representing a compounded annual growth rate of 15%. This expansion is set to continue and reflects a recent boost in industry activity. In December 2020, The Singapore Food Agency approved EAT Just’s cultured chicken for human consumption. This was the first approval of its kind, paving the way for further consumer and regulatory acceptance. The world’s first restaurant serving cultured meat was also launched in Israel at the end of 2020, and in April 2021, Israeli start-up MeaTech raised $25 million through its listing on the NASDAQ, making it the first cultured company to be listed on a US stock market. According to research, consumers are increasingly interested in consuming cultured meat. A literature review found that a high proportion of people would try it, and a 2021 study found that around 80% of UK and US consumers would be ‘somewhat likely’ to try it. This blog explores what cultured meat is, the potential for disruption in the global protein supply chain, and some of the ESG risks and opportunities investors should consider when looking at the industry.

What is Cultured Meat?

Cultured meat is created by extracting stem cells from animal muscle and feeding them the necessary nutrients to multiply, eventually forming muscle tissue. This process results in a product that is cellularly identical to conventionally produced animal meat. Although it is commonly referred to as ‘lab-grown meat’, the process is more akin to beer brewing, with large bioreactors containing the stem cells and nutrients needed to grow animal protein.

Despite sounding like science fiction, the technology in this space is developing rapidly, resulting in drastic production cost reductions. Since 2013, costs have fallen from around $280,000/kg to roughly $10/kg today. Research suggests that this could continue to fall to $5.66/kg, reaching price parity with conventional meat by 2030 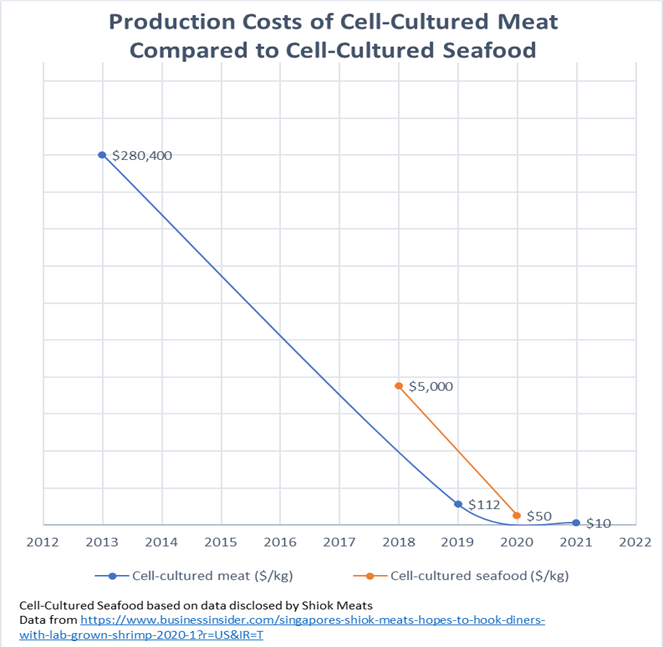 Capital flows into the cultured meat industry have grown rapidly, hitting around $1 billion by 2020. Over $360 million was invested that year, more than six times the amount in 2019. Some of the largest protein producers have also invested in the space, with the investment arm of Cargill investing in Memphis Meats and Aleph Farms, and Tyson Foods’ venture fund investing in Memphis Meats and Future Meat Technologies. Similarly, Brazil’s BRF announced a partnership with Israeli cultured meat start-up Aleph Farms to supply cultured beef to the Brazilian market. This forms part of BRF’s ‘Vision 2030’ strategy to reinvest BRL 55 billion (≈ $10.7 billion) over the next decade to triple companywide revenues. These high-profile investments by the animal protein producers are sending a strong sign of approval for cultured meat.

Investments in cultured meat have not been limited to the private sector. In 2021 alone, the Spanish government has invested €5.2 million ($6.3 million) and €250,000 ($300,000) into BioTech Foods and NovaMeat, respectively. In 2020, the U.S. government’s National Science Foundation issued a $3.5 million grant to UC Davis researchers to explore cultured meat as a solution to feed a growing population. This public industry buy-in is crucial for cultured meat products to reach price parity with conventionally produced meat by 2030, as highlighted by research house, CE Delft. Public sector engagement will also nurture and develop the regulatory environment needed for other nations to approve the sale of the product. This was displayed through Singapore’s approval of cultured meat, following their $50 million investment into sustainable protein factories in 2019, and a $110 million cultured meat lab at the National University of Singapore in 2018. These investments form part of Singapore’s food self-sufficiency goal, aiming to source 30% of their nutritional needs domestically by 2030.

Investor Members can view a non-exhaustive list of venture investments in the sustainable protein industry here.

Diversifying protein portfolio exposure presents an opportunity for investors to offset non-financial risks associated with an overreliance on animal-based protein. There are material risks of environmental regulations on the conventional meat industry, particularly in the form of a carbon tax. This is increasingly likely after the UK, US and Japan pledged to cut emissions by 78%, 50% and 46%, respectively. FAIRR research estimates a carbon tax on meat could cost 40 of the largest global protein producers $11.6 billion of EBITDA by 2050. As highlighted by the Coller FAIRR Protein Producer Index, intensive livestock production also creates material deforestation and biodiversity risks, consuming 80% of global soybeans, which exacerbates climate change and the loss of biodiversity. Moreover, as animal agriculture consumes 30% of global freshwater supplies, sourcing animal protein from cultured meat would limit the material risk of water supply shortages. Consequently, protein diversification is crucial for risk mitigation and cultured meat presents itself as a potential solution to several environmental issues.

Another crucial benefit of cultured meat over conventionally produced animal protein is the absence of antibiotics in the production process. Antibiotic overuse poses a material risk to investors through the threat of antimicrobial resistance (AMR), which is forecasted to cost the global economy $100 trillion by 2050. AMR is responsible for over 700,000 deaths annually, and predicted to reach 10 million per year by 2050; such figures also carry the risk of future class action. With 80% of global antibiotics fed to livestock animals, the conventional animal protein industry is heavily exposed to AMR-related risks. Many leading cultured meat companies have asserted that antibiotics will not be used in the production process, presenting an opportunity for investors to mitigate their exposure to the negative consequences derived from the overuse of antibiotics, whilst maintaining exposure to the animal protein industry.

Despite consuming less energy than conventionally produced meat, cultured meat production is an energy-intensive process. This poses regulatory risks through the threat of a carbon tax on meat. However, the use of renewable energy in the production process could offset the high costs of production and GHG emissions. One study found that the use of renewable energy could cut the carbon footprint of the cultivated meat industry by up to 80%. Another study found that renewable energy sources will be critical in achieving price parity with conventionally produced meat by 2030, at around $5.66/kg.

The sourcing of ingredients from monoculture farming methods as the feed medium used in cultured meat production presents additional environmental risks. Historically, Fetal Bovine Serum has been used as the medium, but the industry has unanimously agreed to replace it with cheaper, plant-based ingredients. However, an overreliance on a handful of crops presents both financial and non-financial risks. A report by the Good Food Institute finds that the medium represents between 55% – 95% of marginal costs when produced at an industrial scale. Therefore, cultured meat production costs are largely influenced by price fluctuations in these input ingredients, which can fluctuate from adverse weather events, or supply and demand shocks. Monoculture farming also presents climate risks through soil erosion, along with an overuse of pesticides and fertilizers, which can contaminate the air and groundwater, causing pollution. Therefore, the use of monocrops as a medium for cultured meat present several environmental risks that should be considered.

Questions surrounding social and governance issues also remain. Most cultured meat companies are privately held, resulting in lower levels of governance reporting, and risks on issues including gender board representation, executive remuneration and audit objectivity. For example, in 2017 almost the entire board of directors at EAT Just (formerly called Hampton Creek) stood down following accusations of sales manipulation and product mislabelling. This temporarily left CEO, Josh Tetrick, as the only board member. Additional risk factor considerations for investors in the cultured meat industry include:

With investor support sitting at $38 trillion, the investment community is becoming increasingly aware of the material ESG risks associated with intensive livestock production, such as deforestation and biodiversity, climate change and working conditions. Cultured meat has the potential to severely disrupt the conventional animal protein industry due to improvements in efficiency and reduced environmental consequences, allowing the industry to avoid regulations. However, there remain material ESG risks for investors in the nascent industry, along with uncertainty surrounding consumer acceptance and demand.

The FAIRR is working to build a risk framework to guide investor members on due diligence and drive transparency and disclosure over the ESG considerations for the sustainable protein industry, including plant-based, fermented and cultivated protein producers. The framework will address the thematic issues of: