One of the greatest challenges facing the world today is to ensure that the growing population has access to adequate, sustainable and nutritious food. The global food system is under increasing pressure to meet this challenge. This pressure is particularly evident in livestock production, given the sector’s substantial external impacts, and a global growing middle class that is demanding more meat and dairy products.

Conventional livestock production systems have enjoyed uninterrupted growth over the last few decades. However, growth has largely come at the expense of widespread natural capital degradation that heightens the impacts of climate change worldwide. Across three key areas – greenhouse gas emissions, water and land use – animal proteins have a significant environmental footprint. Further, they are increasingly vulnerable to impacts from rising temperatures.

These issues present growing challenges to the supply security, sustainability ambitions, brand and reputation, and financial growth of food companies that depend on the sale of products that wholly or partially involve intensively farmed animal proteins. Given this sector is highly resource-intensive and dependant on a range of unpriced externalities, we expect that future growth will likely be constrained in the longer term.

Investors must engage with food companies to ensure that they are developing a strategic, forward-looking approach to managing the climate and water risks in their meat and dairy supply chains.

In the last 15 years, global consumption of beef, poultry and pork is estimated to have risen by 30%. Projections show that this will continue to grow. 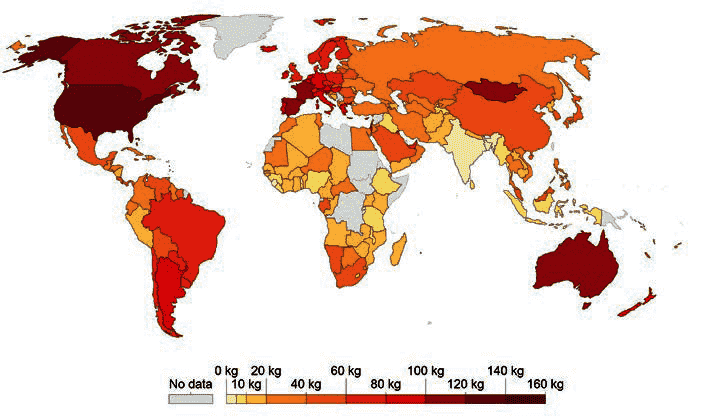 Meat supply, 2013. Average total meat supply per person measured in kilograms per year. Note that these figures do not correct for waste at the household/consumption level so may not directly reflect the quantity of food finally consumed by a given individual. Note: Data excludes fish and other seafood products.
Source: FAOSTAT.

Overall, worldwide consumption of animal-based foods (meats and dairy) is expected to increase 79% between 2006 and 2050, and beef demand by 95%.

Increasing urbanisation, a growing middle class and higher disposable incomes will lead to an increase in demand from developing countries: China already accounts for half the world’s pork market and 70% of farmed marine products worldwide. The country produces most of its own animal protein but relies on imports for feed ingredients, such as soy. By 2026, China’s meat (poultry, pork, beef and sheep) consumption will be 27% of the world’s total meat consumption. Its soybean imports will increase by 143 million tons – 48% more than what the current leading soybean producer (Brazil) will export.

Meeting growing demand is not achievable within planetary boundaries

Reducing emissions in this sector is crucial to keeping global temperatures below 2°C. According to a recent report by the FAO, livestock production was responsible for 8.1 gigatonnes CO2-eq, or 16.5% of total GHG emissions in 2010. This is largely due to enteric fermentation, feed production, and manure management. This is equivalent to emissions generated by the transport sector. Agricultural emissions, including those from meat and dairy, are on track to contribute approximately 70% of total allowable GHG emissions by 2050, creating an 11 gigaton mitigation gap required to stay under the 2°C threshold.

Agriculture is responsible for around 70% of global water use. Livestock production accounts for nearly one-third of that use. For example, beef’s water footprint (on a per pound of protein basis) is six times that of pulses. Milk, eggs and poultry are around 1.5 times more. Nearly 98% of this water goes towards the production of animal feed, the production of which also results in large-scale water pollution due to excessive application of fertilizers. Manure can be an important soil nutrient, but the scale of intensive farming today produces quantities in significant excess of what can be absorbed by the surrounding environment.

Recent estimates suggest 70-80% of all global agricultural land is used for pasture and growing crops for animal feed. A quarter of cropland is already used specifically to grow feed such as soy and maize for animals, and at current rates of consumption, this is projected to increase by 50% by 2050. Intensive livestock production is already one of the most significant drivers of deforestation and biodiversity loss worldwide. Around 80% of deforestation globally is due to agriculture, and more than 375 million hectares of forest have been converted to livestock production in the last 50 years – equivalent to the combined area of India and Morocco. According to the FAO, 20% of the world’s grasslands are already degraded affecting regional water availability, soil fertility, biodiversity and climate change.

Intensification of animal agriculture is not the solution

Today, intensive production methods have become the dominant system of livestock and fish farming – an estimated 70% of farmed animals are now raised in this system, including 99% of US farm animals. This trend is increasing. A large number of Asian countries, including China, are consolidating farms to reduce fragmentation and increase production efficiencies.

However, the intensification of animal agriculture is exacerbating the sector’s impacts on the natural environment and has a detrimental impact on key social issues including food security and health.

The scale of the risks facing this sector makes sustainable agriculture practices necessary, but not sufficient, to ensure its long term viability. Shifting consumption patterns towards diversified protein sources must also be part of the solution.

For investors, there are also myriad opportunities to be seized from the burgeoning alternative proteins market, including plant-based proteins, which offer a more sustainable food production model.

Animal farming is more environmentally damaging than growing plant protein. It takes up 83% of global agricultural land, but only delivers 18% of calorie intake. Meanwhile, plant-based diets cut land use by 76% and halve GHG emissions and other pollutants caused by food production. According to the World Resources Institute: “Because many animal-based foods rely on crops for feed, increased demand for animal-based foods widens the food gap relative to increased demand for plant-based foods.”

On average, consumption of animal proteins is in excess of nutritional needs. Various studies have linked the overconsumption of animal protein, especially red and processed meat, to a variety of non-communicable diseases: a British Medical Journal study of half a million Americans found the risk of dying from cancer, heart disease, stroke, diabetes, infections, kidney disease, liver disease or lung disease all increased with the amount of meat consumed.

While this is predominantly a problem in Western markets, a diet heavy in processed animal proteins is increasingly an issue for emerging markets. For example, daily meat and dairy consumption in China averages at around 300 grams. Meanwhile, the country is facing rising obesity: within one generation, the percentage of Chinese children who are overweight or obese has risen from 5% to 20%. In response to health and environmental concerns, in 2016, the Chinese government released dietary guidelines that recommend limiting meat, poultry, fish and dairy consumption to 200 grams daily.

The cost of treating resistant infections has added an additional $2 billion in healthcare expenditures in the USA, and the estimated loss in global output is set to cost $100 trillion by 2050. The issue of antibiotics resistance is already firmly on the regulatory agenda.

The World Health Organisation (WHO) developed a set of guidelines in November 2017, recommending farmers and the food industry to stop using antibiotics routinely.

China’s chicken poultry markets have suffered notable fallouts from avian flu outbreaks in the last couple of years as mass culls have affected prices and the stock performance of poultry companies. More recently, China as one of the largest producers and consumers of pork has been significantly affected by African Swine Fever with approximately 20,000 pigs being culled. The financial implications for the pork industry are significant as the disease continues to spread to other markets.

Across markets, areas with a large concentration of livestock production have repeatedly seen the impairment of local waterways, leading to reputational risk, litigation and community protests in countries including New Zealand, Australia, Netherlands, and multiple states in the US. For example, Smithfield Foods, a large US pork producer and an important supplier to many consumer-facing food companies was hit with a $473.5 million fine after three lawsuits from local communities in North Carolina complaining about the noise and smell coming from hog farms connected with the company 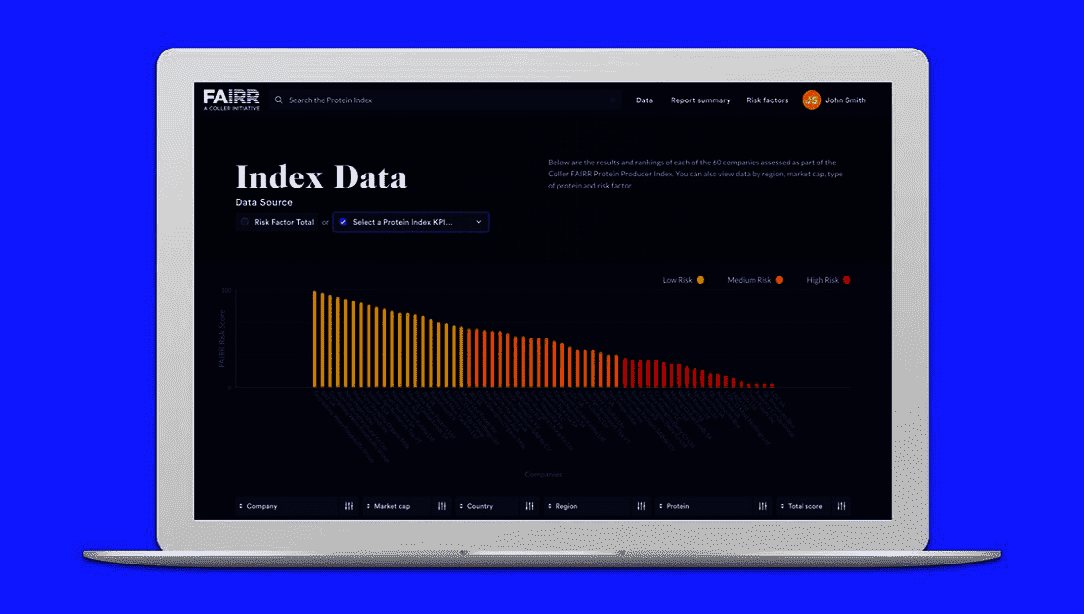 The conventional protein sector is at risk of being disrupted

While animal proteins will dominate the market in the near to mid-term, food companies that are heavily reliant on intensive livestock systems are under threat of disruption from two fundamental drivers.

Consumers in developed markets are increasingly reducing meat intake to improve their health – leading to a burgeoning interest in alternative
protein products. For example, sales of alternative meat products account for less than 1% of fresh meat sales in the U.S. but are growing at an annual rate of 24.5%, according to Nielsen Total Food View. Sales of plant-based “milk” climbed 7% over the past year, while conventional milk sales declined by 4%.

The food technology revolution that is currently underway – from advanced plant-based proteins to cultured (or ‘clean’) meat products – will produce protein-rich foods without the animal. This, in turn, will create a step-change in efficiency for a fraction of the cost and with far fewer adverse impacts. Venture capitalists have committed $1.3 billion to food tech in the first five months of 2018, compared to a total of $1.5 billion in the whole of 2017.

Companies that aren’t investing in this type of innovation could lose value in the long term. 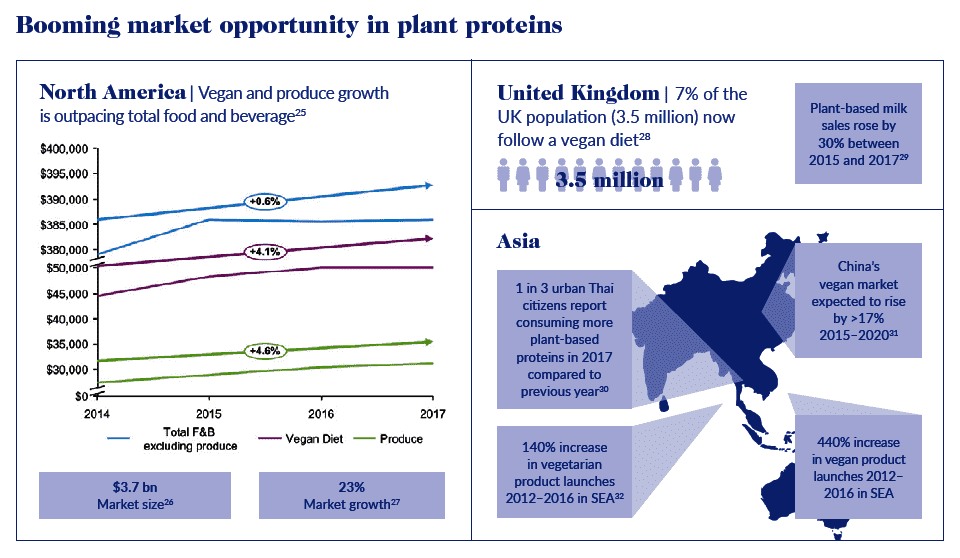 The Task Force on Climate-related Financial Disclosures (TCFD)’s guidelines for the Agriculture, Food, and Forest Products Group identifies ‘Developing new products and services with lower carbon and water intensity’ as one of the key opportunities for companies. The recommendations specifically ask for disclosures on ‘the opportunities that capture shifts in business and consumer trends toward food and fibre products, processes and services that produce lower emissions and are less water-/waste intensive while maintaining adequate food security.’ Protein diversification falls squarely in this category.

The global investor engagement on meat sourcing is an initiative led by investors to improve the sustainability of the six largest restaurants in the global fast-food sector. The engagement, coordinated by Ceres and FAIRR, and calls on these sector leaders to develop a strategic, forward-looking approach to managing the climate and water risks in their meat and dairy supply chains. As engaged investors, we believe these risks threaten the long-term value and viability of these companies.

Find out more about this engagement 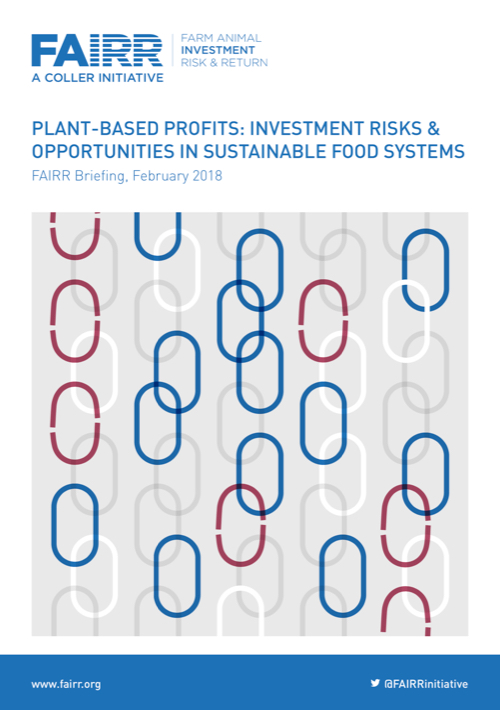 Over 180 countries now impose a tax on tobacco, 60 jurisdictions tax carbon and at least 25 tax sugar. Is meat next in line?…

Thank you for your interest in the our 2019 report from the Global Investor Engagement on Meat Sourcing, coordinated by Ceres and the FAIRR Initiative. You will shortly receive an email with a link to download the report. If you have not received this within the next few minutes, please check your junk folder.