From an investor perspective, antimicrobial resistance (AMR) is a serious risk. The World Bank estimates the losses inflicted by AMR could cause annual global gross GDP to fall by 3.8% by 2030. Animal agriculture has a huge role to play in tackling rising AMR as an estimated 70% of antimicrobials are consumed by animals.

On the one hand, 2021 was a year of growing recognition of AMR. In April, the United Nations General Assembly hosted a high-level dialogue on AMR, one of the most important moments for the topic at the UN in years. In June, G7 Health Ministers unanimously pledged to take a ‘One Health’ approach to tackle AMR – in other words, an approach that incorporates the human, environmental and animal impacts. G7 Finance Ministers acknowledged the huge financial and material risks AMR poses for the first time, calling in June 2021 for strengthened market incentives to combat the “silent pandemic” of AMR.

In August, in advance of the UN Food System Summit, the Global Leaders Group on Antimicrobial Resistance urged all countries to reduce the use of antimicrobials and improve stewardship. Additionally, the Food and Agriculture Organisation (FAO) released in November its roadmap for responsible antimicrobial stewardship, highlighting the need for reduced antibiotic use in agriculture.

…But more steps back

On the other hand, AMR was barely discussed in leaders’ speeches at the UN Food System Summit in September 2021, other than a brief mention in the Secretary-General’s Chair Summary. This absence was a surprise, especially as the WHO has added AMR to the top 10 global health risks facing humanity. In addition, COVID-19 has overshadowed many health- and finance-related conversations.

For investors, any dismissal of the importance of AMR should sound alarm bells. Leaving AMR unchecked is predicted to cost between 1-5% of countries’ GDP. Another issue still missing from the agenda is the specification of limits for antibiotic residues from manufacturers. Good manufacturing practices will need to be mandated by the WHO and state governments, especially in countries that are major producers of antimicrobials, like China, Bangladesh and India. Unfortunately, attempts to regulate and mitigate the residues from manufacturers in India were dropped by the government earlier this year.

The FAIRR Initiative’s work on AMR and antibiotic stewardship spans the entire food supply chain, from engaging with producers via the Coller FAIRR Protein Producer Index, to engaging restaurant chains and developing a framework to establish best practice for antimicrobial stewardship in the pharmaceutical industry.

FAIRR co-launched the Investor Action on AMR (IAoAMR) initiative along with the Access to Medicine Foundation, Principles of Responsible Investment (PRI), and the UK Department of Health and Social Care, aiming to leverage investor influence to combat drug-resistant diseases, and encourage investors to formally assess AMR risks using a One Health approach. The sixteen investors involved (with c$11 trillion in combined assets) have committed to adopting an AMR lens when making investment decisions and will undertake at least one specific outcome to help this effort. This serves as an ideal platform for investors to use their influence to encourage policymakers to acknowledge AMR not only as a global health risk but also as a financial one. a

Investor partners in this vital initiative used their voice several times in 2021 as seen in the chart below/above. In December, an investor letter to G7 Finance Ministers was issued as a response to the formal acknowledgement of Investor Action on AMR by the G7 Finance Ministers’ Statement on Actions to Support Antibiotic Development. In this letter, investors offered support to ongoing initiatives by the G7 and welcomed the Finance Ministers’ acknowledgement of AMR as a financial risk. Notably, they also called for all G7 nations to end the routine preventative use of antibiotics for growth promotion in intensive farming. In addition, they highlighted the importance of ‘pull mechanisms’ to develop new antimicrobials and recommended governments follow the UK example of implementing a subscription-based model for antibiotic payments. 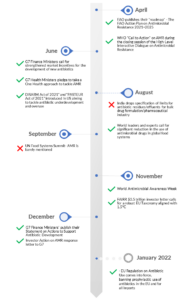 Investors need specific targets and definitions to effectively address the AMR crisis in their corporate engagements. Unfortunately, the EU’s taxonomy on sustainable finance may do more harm than good in terms of AMR, as it does not currently include criteria on antibiotic risk as part of the ‘Do No Significant Harm’ criteria, as pointed out in FAIRR’s recent $3.5 trillion investor letter. Preliminary research shows antibiotic use in livestock production could impair soil microbes’ ability to absorb carbon dioxide, and the development of resistant microbes in the environment could also threaten biosphere integrity, highlighting biodiversity risk, as well as huge implications for public health.

Ultimately, investors are asking for more coherence in how antimicrobial use is regulated. The legislative advances made by the EU are paving the way for a change in the animal farming industry, to move away from the prophylactic use of antimicrobials, to ensure their effectiveness continues. This will contribute to enabling us to live healthy lives on a healthy planet and achieve the UN Sustainable Development Goals.

Antimicrobial overuse and misuse in animal agriculture will need to be addressed, as animal agriculture is the leading user of antimicrobials worldwide. Investors have a key role to play in addressing AMR, by engaging with companies, demanding transparency on antimicrobial use, joining the IAoAMR initiative, and/or engaging governments to make necessary legislative changes. We hope to see their role strengthened even further in 2022.