In July 2019 the Brazilian beef company, Marfrig, announced a $500 million transition bond sale to finance their purchase of cattle from the Amazon biome. The FAIRR Initiative reviewed the framework for the Marfrig Transition Bond and have outlined our initial thoughts below, including suggested engagement questions for investors.

From our perspective, it seems that Marfrig will use the bond proceeds to finance what it is already doing relatively well from a sustainability standpoint. For Marfrig to encourage a shift (or transition) to greener operations, the company could instead have focused on:

Marfrig is the world’s second-largest beef company in terms of capacity[1]. The Brazilian company is an integrated meat producer with 36 global production units and distribution centres. Until recently, Marfrig was involved in poultry production through its Keystone subsidiary, but it sold the business to Tyson in 2018. The company expanded its exposure to beef when it purchased a controlling stake in US National Beef in 2018. North American revenues now constitute 69% of Marfrig’s total revenues[2].

Purpose of the Bond/Use of the Proceeds

Net proceeds of the bond will exclusively be allocated to the purchase of cattle:

Marfrig announced the issuance of a $500 million 10-year transition bond to yield 6.625%. The deal was apparently three times oversubscribed by a diverse group of global investors. Typically, corporate transition bonds are issued with the intention to raise capital for a specific purpose linked to a company’s transformation to ‘greener and sustainable operating models’ and/or to contribute to the company’s transition to a low carbon economy.

In its publicly available Bond Framework Marfrig indicated that their corporate bond proceeds would be used to ensure the traceability of their cattle supply chains in order to mitigate the risk of deforestation. Traceability would focus on supply chains within the states of Mato Grosso, Para and Rondônia – part of the Amazon Biome. Marfrig has also highlighted that the proceeds of this bond would be mainly used to source cattle from suppliers belonging specifically to their ‘Marfrig Club’, an internal initiative created in 2010 to promote sustainable development of Marfrig’s suppliers and to encourage good farming practices.

Marfrig has already instituted a set of ambitious terms of purchase in order to ensure they are supporting ‘sustainable’ ranching practices. Marfrig’s due diligence framework seems relatively high level in nature and includes criteria on animal welfare and environmental impact management. It also requires compliance with the Brazilian Institute of Environment and Renewable Natural Resources’ list of embargoed sourcing areas as well as a commitment to combat slave labour.

Currently, 83% of Marfrig’s suppliers belong to their Club and Marfrig’s aim to increase and improve supply chain transparency. In practice, however, it has only limited supervision of suppliers due to the absence of mandatory on-site audits throughout their supply chain.

Marfrig’s 2018 CDP report mentions that most of their suppliers are ‘indirect’ (farms that buy calves from others in order to continue the fattening process in their own farm and then sell the animal to Marfrig[3]). Out of the pool of indirect suppliers, 78% comply with Marfrig’s supply chain criteria while 22% are put on a blocked list due to ‘irregularities’.

Even though most of their suppliers have been vetted through a version of Marfrig’s due diligence sustainability questionnaire, compliance and verification can be challenging in the cattle supply chain; therein lies risk and uncertainty. Marfrig’s biggest challenge is the traceability assurance of their indirect suppliers; for example, animals bought at the feedlot stage can come from breeding areas subject to deforestation. Even if the company relies on geospatial monitoring, as well as a Request For Information (RFI) tool to monitor compliance[4], the geospatial monitoring seems to be limited to the Amazon Biome and it is unclear whether the RFI tool covers only Amazon-specific suppliers.

We would suggest that the proceeds of a transition bond would perhaps be better directed towards the indirect supplier segment of the supply chain, rather than funding what they currently seem to be doing well (i.e. their direct supplier operations) at least from a sustainable sourcing perspective.

Marfrig specifically states that bond proceeds will be used to source cattle primarily from the Amazon Biome – a region where the majority of their efforts to combat deforestation have been focused to date, including time-bound targets for deforestation reduction. We would also highlight that Marfrig doesn’t have any deforestation policies or targets in other regions such as the Cerrado (apart from the state of Mato Grosso which extends across both the Cerrado and the Amazon Biomes) or Uruguay, where it also has operations.

Social Benefits of the Transition Bond

In addition to a focus on Protection of the Amazon Biome, Marfrig also explicitly states that there are other potential beneficial outcomes from this financing, specifically citing the ‘Protection of Indigenous/Vulnerable Peoples’ Rights’ as well as a mandate of ‘No Use of Forced Labour/Slavery’ within their supply chains.

We note that the company makes a high-level statement on its responsibility to respect human rights and is part of the InPacto Initiative which requires them to make commitments to combat ‘slave labour or conditions analogous to slavery in its businesses and the production chain’. However, this commitment is confined to Brazil only and is a procurement policy rather than a compliance mechanism.

It is important to note that the Brazilian cattle industry has a serious issue with slavery. According to one research report, “The cattle industry concentrates the largest number of people released from contemporary slavery in Brazil. In the past two years alone – 2016 and 2017 – 280 workers were rescued from the cattle industry at 46 different ranches.” One of the cases of slavery in the report was documented at a Marfrig supplier.

Are There Other Sustainability Issues Which Bond Proceeds Could Address?

However, the company’s CDP report only covers Marfrig Beef in South America. In 2018 the company divested its poultry business in the US and acquired a controlling interest (77%) in U.S.-based National Beef, the fourth largest and most efficient beef producer in the United States. According to its 2019 Management Report, its revenues from North America (which seem to include National Beef) represented 69% of its total revenues.

We encourage the company to incorporate its North American beef business into its carbon targets and accounting in its 2019 CDP response.

The company is part of several multi-stakeholder initiatives, including the Tropical Forest Alliance. Marfrig has a timebound (2020) commitment to zero net deforestation/conversion for 100% of sourced soy. The company procures soy from Uruguay, which accounts for about 1-5% of the company’s spending. All of their soy is purchased from RTRS (Round Table on Responsible Soy) producers and is solely used for a feedlot located in Uruguay.

However, the quantity and sustainability of soy used at the US-based National Beef that Marfrig acquired in 2018 is unclear and questionable.

The focus on water used in animal farming is limited to the suppliers that are part of the Marfrig Club and therefore focuses on the Amazon Biome. However, the water footprint for cattle sourced is not measured or reported by the company, and its risk assessment only has partial coverage of the supply chain.

On waste and pollution, the company includes emissions from manure in its CDP Climate report. Most of the discussion focuses on its facilities and not on animal farming. As the transition bond proceeds will be used to purchase cattle from suppliers (i.e farms), we would encourage Marfrig to report on manure management both in this segment of the supply chain and in their own facilities.

This data was taken from Marfrig’s 2019 assessment under the Coller FAIRR Protein Producer Index, our benchmark of 60 global protein producers on critical ESG issues.

[1] See Overview of the issuer in http://www.marfrig.com.br/Arquivos/Marfrig_Sustainable_Transition_Bond_Framework.pdf

Thank you for your interest in our Company Focus report assessing Marfrig's transition bond. You will shortly receive an email from us with a link to download the report. If you have not received this within the next few minutes, please check your junk folder. 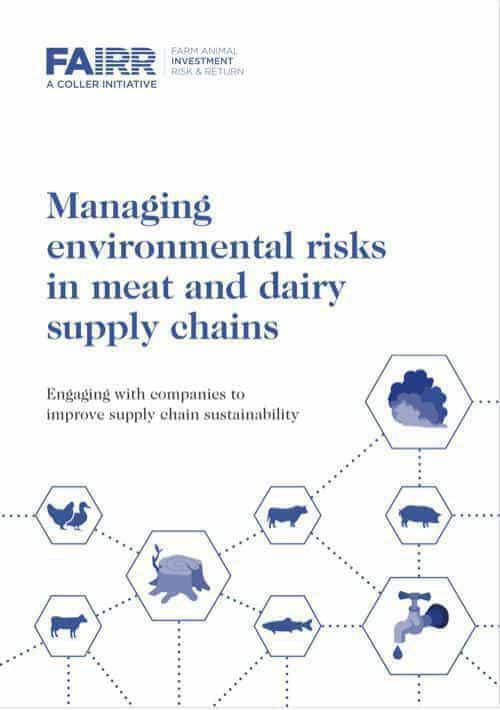