Newly released data for the years 2007-19 has shown that New Zealand dairy sector emissions rose by 3.18% in 2019, reaching their highest level yet and helping to drive an overall increase in agricultural emissions. New Zealand is currently the world’s largest exporter of dairy; Greenpeace representative Steve Abel noted that it is “no surprise that when you let corporations and industries regulate themselves, they basically maintain the status quo of their pollution profile”.

Much needed regulation, however, is coming for the industry, according to New Zealand native and investigative journalist, Baz Macdonald. The government has committed to introducing an agricultural emissions pricing scheme by 2025, a decision that led many farmers to protest. Yet these regulations can also be seen as an opportunity to strike out ahead of the pack in an industry that is facing long-term threats from low-carbon and plant-based alternatives. The FAIRR Initiative’s recent dairy report has the lay of the land, providing a detailed analysis of the threats and opportunities ahead of the New Zealand dairy sector, and making the case for viewing this scheme as a pilot for similar agricultural emission schemes globally.

Net Zero commitments have been especially abundant in the food sector this year, but how much do they really mean? This astute piece breaks down the greenwash surrounding Net Zero targets and highlights the need for accurate, ground-up climate models, such as the Coller FAIRR Climate Risk Tool, which eschew ‘greenwashing’ and do not rely on future technology or unfeasible targets for emissions capture. It makes for a particularly timely argument given the publication of Oxfam’s report this week, which states that the level of afforestation needed to sustain just some of the national Net Zero targets would pose a serious threat to global food security.

Key quote: ‘A commitment can set the stage for action, but it can also provide escape hatches for guilt-free failure. Climate commitments must have a genuine influence on the economy and emissions; however, commitments made today are based on pathways conceived in elaborate top-down models, most of which hold great faith in ‘negative emission’ technologies.’

‘Bringing Home the Bacon Will Soon Cost More in California. For Good Reason, Animal Advocates Say’ by Caroline Anders in The Washington Post

California continues its efforts to push a ‘less but better’ attitude towards protein production, with an initiative coming into effect on 1 January 2022 that will significantly expand the caging space requirements for farm animals. The law is especially impactful as it not only will apply to production in-state but also to all meat sold in the state, which is home to around 12% of the US population. The initiative follows on from other recent paradigm shifts in animal welfare, such as France and Germany’s bans on the crushing of male chicks, and is expected to drive an increase in prices for commodities such as eggs and bacon in California. 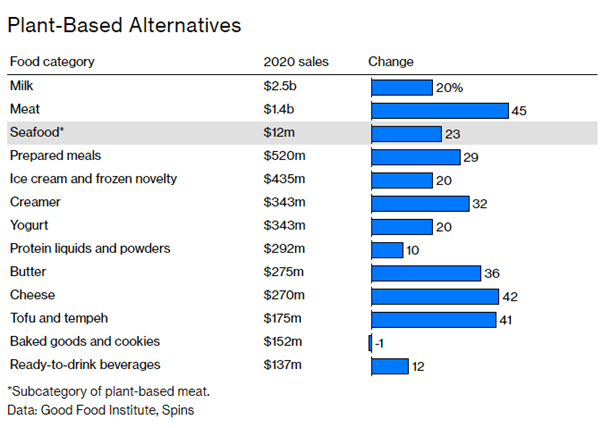 More Food for Thought This Week