By 2030, the planet will generate at least five billion tonnes of faeces each year, 79% of which is currently produced by livestock. At any one time, there is three times the number of livestock animals (including poultry) than there are humans on the planet, and 10 times this number of animals are processed annually. The volume of waste, or faeces, produced by these animals is significant. Left untreated, it poses a risk to human health and biodiversity.

Animal waste from industrial farms remains vastly underregulated compared to human waste. This is also true in developed countries like the United States, where domestic and municipal sewage sludge is subject to regulated use practices, pathogen destruction treatment processes, pathogen testing, and storage guidelines.3 In areas with a concentration of industrial farms, practices include: hog manure being stored in open lagoons, chicken litter being stockpiled in open sheds for extended periods, and manure being spread directly into nearby agricultural fields as fertiliser without any treatment. In many cases, litter is deliberately dumped into rivers, despite this being an illegal practice.

For investors and policymakers, manure mismanagement serves as a precursor to multiple ESG risks, is emblematic of unsustainable business practices, and requires increased scrutiny and stewardship. The scale and extent of the problem are severe, yet remain underreported. That is changing, and this change happens quickly. How protein companies (mis)manage animal manure has significant implications for human health, climate change and biodiversity loss, and consequently, their continued licence to operate.

Livestock feed contains two nutrients that are key for animal health: nitrogen and phosphorus. Nitrogen is necessary for protein formation, and phosphorus is important for bone health and cellular function. Most species have a feed requirement ranging from 0.16% to 0.4% of phosphorus content and from 2% to 2.9% of nitrogen content per ration of dry matter. However, animals are not able to absorb 100% of the nutrients consumed and excrete those that cannot be digested in manure. The presence of these nutrients in animal manure means that it has long been regarded as an effective fertiliser for plant growth.

The industrialisation of animal farming has led to a tenfold increase in livestock numbers since 1960. Globally, livestock animals produce an estimated 3.12 billion tons of manure each year, 127 million metric tons of which are nitrogen. This output of manure has been exacerbated by the changing nature of animal production – away from small farms with adequate land bases to recycle manure nutrients through crop production, and towards concentrated larger CAFOs. This is particularly the case for hog and chicken farms (Table 2). In the US, average hog farm sizes had increased from 1,200 hogs in 1987 to 40,000 in 2012. For example, Iowa produces 24.5 million pigs per year, creating waste equivalent to that produced by 88 million humans.

The current quantities of untreated manure used as fertiliser or otherwise discarded are damaging for people and the planet. Excess nutrients in soils harm local ecosystems and water sources. They also lead to poor health outcomes for communities that live next to intensive farming facilities due to the impact on air quality and groundwater contamination.

The impacts of nutrients, metals and other compounds from untreated manure

Due to transport costs, manure tends to be applied close to where it is produced. This leads to concentrated areas of manure production and application on fields, creating nutrient hot spots. Currently, the rate at which manure from industrial facilities is applied to nearby land typically far exceeds the nutrients the land can absorb.

Nutrient management plans (NMPs) are important tools for farmers to determine the appropriate quantity of manure to apply to the soil as fertiliser – based on analysis of manure nutrient content and soil nutrient requirements for the relevant crops. Creating NMPs is considered ‘Best Practice’ for farmers who want to reduce their environmental impact from nutrient pollution. However, it is not common practice in the animal protein industry. Based on the results from the Coller FAIRR Protein Producer Index 2021/22, only three of the 50 meat and dairy companies have NMPs in place for their own operations.

The problem of nutrient excess is exacerbated by the application of synthetic fertilisers on crops for livestock, which takes up one-third of the planet’s arable land. About 20-25% of mineral fertiliser used globally is linked to feed production for livestock. When the soil cannot absorb these nutrients (from manure and additional fertilisers), excess nitrogen and phosphorus runoff end up polluting waterways, such as aquifers and rivers, endangering human health and depleting biodiversity.

Apart from nutrient pollution, manure from livestock is considered one of the main global sources of heavy metal contamination. Metals, such as copper, zinc and lead, are used as feed additives to promote health or growth. Animals can only absorb 5-15% of the metals they ingest, so most of the metals are excreted and returned to the environment. Many of these metals pose a high ecological risk to soil organisms and crops due to their toxicity, even at low concentration levels., Transmission and accumulation in the food chain threaten animal and human health., Research in China found that livestock manure is the predominant source of heavy metals in agricultural soils, with pig manure being responsible for over 70% of this contamination.

The Gulf of Mexico in the United States includes a dead zone (i.e., an area where low levels of oxygen have dissolved in the water and most marine life dies) of approximately 6,334 square miles – larger than the state of Connecticut. Excess nutrients from livestock production and crops (mostly corn and soy used to feed livestock) along the Mississippi watershed contribute up to 80% of phosphorus residues and 71% of nitrogen residues in the Gulf, stimulating algal growth. The oxygen consumption of the growing algae depletes levels in the water to a point where the remaining oxygen becomes insufficient to support most marine life, rendering the habitat unusable and forcing species to move to other areas to survive. The National Oceanic and Atmospheric Administration (NOAA) estimates that this dead zone costs the US seafood and tourism industries $82 million a year. Fishermen are forced to travel farther from land—and spend more time and money—to catch fish and other commercial species, such as shrimps, that move out to sea to avoid the dead zone.
This is not an isolated example, and high concentrations of ammonia – a gaseous compound of nitrogen and hydrogen – from manure pose a significant threat to biodiversity through the impact of nitrogen accumulation on species diversity in affected habitats. Nitrogen-rich environments favour common, fast-growing plant species adapted to high nutrient availability, which out-compete more sensitive, smaller or rarer species. In ecosystems with high ammonia pollution, scientists have observed lower species richness and diversity. As plant species change, insects and animals that depend on ecosystems with a certain plant composition are affected too.

Manure produces both methane (CH4) and nitrous oxide (N2O); greenhouse gases (GHG) that have 27 and 273 times the warming effect of carbon dioxide over a 100-year period, respectively.

During storage and processing, the anaerobic decomposition of organic matter in manure creates methane – mostly when manure is managed in a liquid form(e.g., in deep lagoons or holding tanks). Nitrogen from manure is primarily released in the atmosphere as ammonia (NH3) that can be later transformed into N2O.

Manure storage and processing represent an estimated 10% of the total emissions from global livestock. This percentage is an underestimation since it excludes emissions associated with manure used on pasture for feed production.

Communities living near intensive farms and fields are exposed to myriad health risks and can experience severe health problems due to manure-related pollution. When considering the land used to grow feed crops, the livestock sector is the largest source of water pollution globally, and nitrate from farming is the most common chemical contaminant found in groundwater aquifers. Research indicates that high nitrate levels in drinking water are associated with elevated risks of colorectal cancer and thyroid disease, as well as blue syndrome and neural tube defects for babies. Phosphorus and nitrogen contribute to toxic algal blooms, which are difficult to eliminate through water treatment processes and can affect the health of people and livestock.

Noxious gases emitted from intensive farming practices, such as ammonia and hydrogen sulfide, pollute the surrounding air. In the US, an estimated 12,700 deaths per year result from air pollution attributable to animal-based foods – 12.7% of all the premature deaths caused by air pollution in this country.

Of all air pollutants from manure, ammonia – which is released by microbes feeding on organic matter – has the greatest impact on mortality. Ammonia can combine with other pollutants, such as nitrogen and sulfur compounds, to create small, hazardous particles known as PM 2.5. Inhaling these toxic fumes in large quantities can be lethal. Studies have demonstrated that people who live near industrial farms have a much greater risk of chronic asthma, respiratory irritation, immune suppression, and even mood disorders. 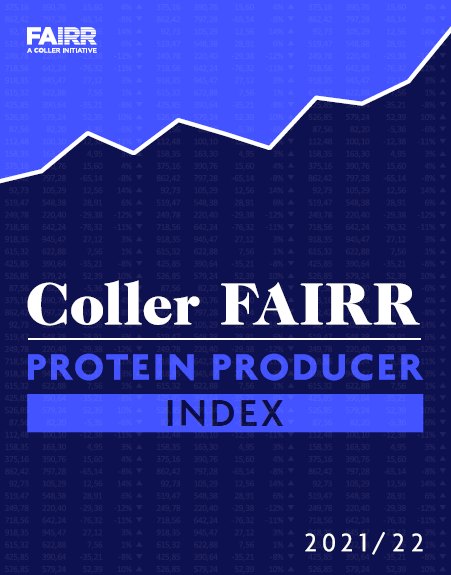 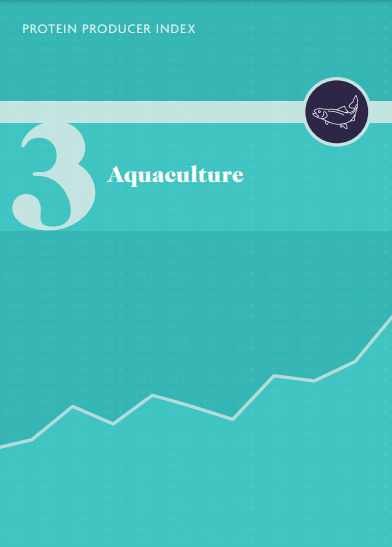 Thank you for your interest in Coller FAIRR Protein Producer Index. You will shortly receive an email with a link to download the Spotlight report. If you have not received this within the next few minutes, please check your junk folder.