Food production accounts for over a quarter of the world’s greenhouse gas emissions. Of these, 31% come directly from livestock and fisheries. With the global population soaring and developing countries such as China and India driving up demand for meat products, the need to address emissions produced by this sector will only be intensified. Scope 3 target-setting is a crucial step to prevent irreversible damage.

For food retailers and manufacturers, the majority of their emissions actually arise upstream or downstream of their direct operations. According to the Climate Disclosure Project (CDP), the average company’s scope 3 emissions are 5.5 times greater than their Scope 1 and 2 emissions combined. Therefore, addressing Scope 3 emissions (the indirect emissions sources within value chains) offers one of the most significant reduction opportunities.

The Science Based Targets initiative (SBTi) is the current benchmark for Scope 3 target setting. To have a target approved by the SBTi, a company must formally commit to the process, selecting baseline and target years for assessment. Targets are usually presented as a percentage reduction.

Despite the buzz surrounding Scope 3 targets, there is a lack of disclosure that must be addressed. Disclosure is crucial for investors to understand how ambitious individual company targets are. Some level of ambition can be judged by comparing % targets over their duration, which is the most common level of disclosure for companies. However, this is a two-dimensional approach. It suggests that a target follows a linear trajectory, but for many companies, they may actually increase their emissions some years. For example, General Mills revised their baseline year emissions up by 0.1 Mgt of CO2 after acquiring Blue Buffalo, their pet business. 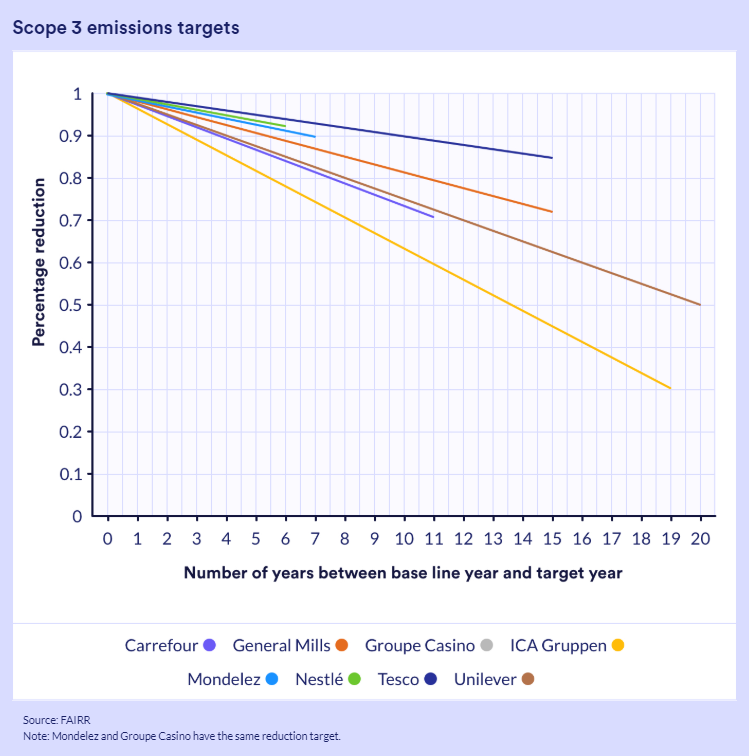 Other gaps include (i) how much CO2 a company produces, (ii) how a company sets targets and (iii) how it intends to meet them. Investors need a comprehensive overview of whether companies are addressing the most important aspects of their value chains and for the majority of food companies, this means addressing their protein supply chains.

The FAIRR Initiative defines an ambitious target as one that is science-based, approved by the SBTi, covers animal agriculture, and is fully and publicly disclosed.

State of the Industry

As part of our new Sustainable Proteins Hub, FAIRR ranked the world’s 25 largest food retailers and manufacturers according to the ambitiousness of their Scope 3 targets. 19 companies have, or are in the process of setting Scope 3 targets, but General Mills, Nestle and Groupe Casino are the only companies to disclose the amount of CO2 produced throughout their value chain.

There is greater progress when it comes to the inclusion of animal agriculture. 13 out of 25 companies have or will include this in their targets. General Mills and, more recently, Ahold Delhaize have disclosed a breakdown of animal agriculture in their emissions. For the former, 52% of emissions come from agriculture, with meat and dairy representing 15% and 21% respectively. For Ahold Delhaize, 38% of their Scope 3 emissions come from Meat, Fish, Dairy and Eggs.

US companies are amongst the worst performers when it comes to ambitious Scope 3 targets. Only two companies, Walmart and General Mills have targets approved by the SBTi (Walmart) and 3 out of the 6 companies without targets are American (Amazon, Costco and Kroger).

FAIRR’s engagement has highlighted the need for greater disclosure of targets. If we are to reduce greenhouse gas emissions in line with a 1.5-degree scenario under the Paris Agreement, we need ambitious action, not just ambitious target-setting.

*Read more about the FAIRR Initiative’s Sustainable Proteins Engagement, which asks 25 leading food companies to diversify their proteins sources, and is supported by 88 institutional investors representing over $13.1 trillion in combined assets.