Regenerative agriculture is now a notable feature in sustainability reporting. According to data from Bloomberg, it has been mentioned over 150 times in the S&P 500 and the STOXX 600 company filings in the past year (see chart).

While there is no clear-cut definition of regenerative agriculture, it is generally accepted that the term encapsulates a method of farming that seeks to eventually reverse environmental damage. This could include: reducing emissions and sequestering carbon in soils; making more space for biodiversity on farms (thereby reversing the sector’s net negative impact on nature); empowering all farmers as land stewards; and aligning incentives to improve farmers’ livelihoods in the process. Ultimately, however, it will be the packaged food companies that will need to reassure consumers, investors, and regulators that these key agricultural commodities truly are sustainable, and that regenerative goals are more than just empty claims.

Consumers seem dubious to say the least. A recent survey from the International Food Information Council (IFIC) showed that a third of US consumers would choose a more expensive product if it was labelled as having been “grown with regenerative agriculture”. Similarly, other studies, such as the recent survey from YouGov.org, found that almost two-thirds of US consumers are swayed by environmental labelling.

Food production uses more than a third of the world’s land and three quarters of its freshwater. Evidence suggests that at least 27% of global deforestation is directly linked to agricultural commodities, though the figure is closer to 50% when looking specifically at tropical deforestation. Much of this land-use change can be attributed to intensive livestock farming, either providing grazing land for animals or producing the maize and soy to feed them – both in turn drive climate change, biodiversity loss, and soil degradation. 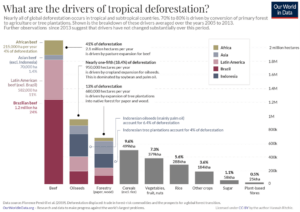 Source: Our World in Data

To prevent further biodiversity loss, it is essential that we begin to reverse land use change and aim to convert 30% of the world’s land mass into conservation areas. This target was set by the Conference for Biological Diversity, which has so far seen 168 countries commit. However, this is still not enough. We also need a concerted shift toward regeneration of farmed land to minimise degradation of soils, safeguard pollinators and build resilience to climate change. These are all areas where regenerative practices could make a difference.

What Does Regenerative Agriculture Actually Tell Farmers to Do?

The regenerative label has been around since the 1970s, yet there is still little consensus on a definitive set of practices that effectively capture carbon and reduce agriculture’s impact on biodiversity. Flexibility and adaptability are central to the theory of regenerative agriculture, which suggests that local farmers know their land best and should be empowered to use a variety of practices to achieve the desired outcomes. We are most likely to see this happen if the financial incentives are aligned accordingly by the governments and corporations to whom they sell.

Despite a lack of consensus, some of the more easily implemented regenerative practices (such as reducing the use of chemical fertiliser and tillage) are gaining traction. We may also see an increase in other regenerative practices due to the current input-cost crisis, exacerbated by the war in Ukraine. Prices of nitrogen fertiliser in the UK, for example, are up 200% year-on-year, according to the National Farmers Union. The input cost crisis could accelerate the adoption of additional practices, further reducing reliance on chemical fertilisers in the mid-term. Approaches such as diversifying cover crops with legumes, increasing crop rotation and integrating livestock grazing to arable fields may become more economically appealing options.

You Can’t Fix What You Can’t Measure

Many regenerative practices, such as reduced tilling, cover crops, polycropping and the integration of livestock, can have positive impacts on both soil and farm ecosystems. The extent of this impact is hotly debated, putting pressure on companies to come up with comprehensive measuring systems.

Regenerative grazing (sometimes called holistic grazing) is a good example of a contested practice where anecdotal cases, such as General Mills’ White Oaks Pastures, are showing more positive results than controlled studies. Part of the problem may be that many studies compare regenerative and conventional grazing on sites that are too diverse in climatic, ecological and logistical conditions (e.g., herd size, farm size, etc.). Rightly, critics also express concern about the lack of specificity surrounding the principles of regenerative agriculture. When practices only prove effective under certain conditions in specific locations, it creates reasonable doubt as to their feasibility at a global level. This can have ramifications for the corporate value chain in terms of application, target setting, and data reporting, especially if they want to be taken seriously by markets and consumers.

Some metrics are emerging to quantify the effectiveness of specific practices, such as soil microbial biomass and diversity measurements. This could help companies to better align actions with outcomes, thus facilitating target setting with clear milestones and reporting. While simple metrics for things like worm counts and wildlife diversity tracking have been around for some time, farming on the whole remains far from regenerative. Investors will need more comparable data to be able to properly assess viable options in the short and medium term. Consumers will need simple definitions and clear marketing in order to justify a higher price tag. Both are necessary for regenerative agriculture to be a win-win for both farmers and the food system.

Clear Communication Will Help Getting Stakeholders on Board

While the verdict is still out on whether regenerative agriculture can improve and stabilise yields in all scenarios, those practices could indeed offer real and exciting alternatives for commodity production if properly adapted to site-specific conditions and the all-important need to convert more land to protected conservation status. Better communication and reporting will facilitate dialogue amongst stakeholders, yet companies face a tricky balancing act. On the one hand, they must adopt a flexible approach to create real positive impacts. On the other hand, they need to evidence their commitments with clear data and milestones that demonstrate how sustainable practices are implemented and drive the touted positive outcomes.

Quantified financial commitments, such as Nestle’s $1.2 billion investment to support farmers with regenerative practices, are a good start. That’s equivalent to around $500 per year for every farm in its supply chain, though, admittedly, a drop in the ocean of the $10.6 trillion estimated annual economic loss from land degradation. Yet, some investors are already pushing back against investment in sustainability, so clearly communicating the long-term benefit of managing risks arising from destructive land management practices in supply chains is more critical than ever.