It’s several months since the emergence of African Swine Fever (ASF), and although this animal pandemic may not be hitting the headlines as it was a few months ago, it is hitting the value of meat companies and investment portfolios, especially in China.

As shown on the map below there has been more that 100 outbreaks of ASF reported across 24 provinces in China alone. And ASF’s financial damage is now starting to become clear. 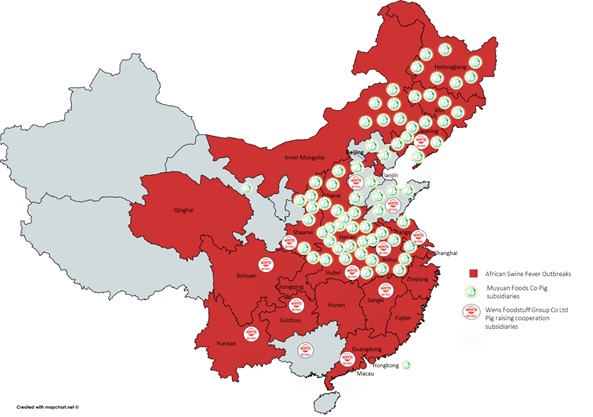 One of China’s largest pork producers Muyuan Foods Co. Ltd, which has a large presence in central and northern China, two regions hit particularly hard by ASF, has slashed its net profit forecast for 2018 to between 500 and 550 million yuan (US$75 million), one fifth lower than its previous estimate.[1]

It has been a similar story of doom and gloom for Wens Foodstuff Group Co. Ltd., one of the world’s largest livestock companies with a market capitalisation of almost 150 billion yuan (US$22 billion).[2] Despite possessing a diverse product portfolio, the company has warned of a 40% decrease in net profit for 2018, with the finger of blame pointed firmly at the nation’s ASF crisis.[3]

And predictably, the world’s largest pork producer WH Group has also suffered significant losses. After pigs died of ASF at one of the company’s slaughterhouses in central China, the firm was forced to close operations there for nearly two months, which was accompanied by a nearly 10% drop in share price.[4]

A question of when, not if, for China’s meat industry

Perhaps most alarming about the outbreak of ASF is the pace at which it has spread.

It took only three weeks for ASF to travel from Shenyang in northern China to Wenzhou, south of Shanghai — a distance of 2,100 km, in no small part due to the fact that the nation currently has few regulations on livestock welfare and disease management. Few Chinese producers disclose their biosecurity processes, for example.[5]

ASF is not just a problem on China’s plate either. China shares borders with 13 countries, and with the pork industry plagued by a murky supply chain and limited traceability, it’s now estimated that up to 558 million pigs in Asia could be affected by ASF, which equates to almost 70% of the global swine population.[6] In Europe, EU officials predict that ASF will spread into France, Germany, Austria, Finland and Slovakia this year.[7]

How can investors safeguard themselves from losses?

While the Chinese government is implementing a wide range of outbreak control measures including the culling of infected pigs, a complete ban on feeding catering waste to pigs and the closure of live pig markets in regions with reported ASF outbreaks, investors are also looking for ways to reduce their exposure to this risk.

One tool, helping investors do this is our Coller FAIRR Protein Producer Index, launched last year, which ranks 60 of the world’s largest food companies on their vulnerability to ESG risks. All three Chinese companies that have now issued profit warnings — Muyuan, Wens and WH Group — were categorised back in May by the Index as ‘high risk’.

The spread of animal pandemics is nothing new to the intensive farming industry, which has seen highly-contagious pathogens like mad cow disease and bird flu cripple the industry. And until the intensive farming sector tackles issues such as the close confinement of animals, and an opaque supply chain that lacks traceability, ASF is unlikely to be the last such pandemic.

Prudent investors would be wise to factor in such risks before they take a significant bite out of their returns.