Although 2021 has been perceived globally as a shift from the shock of 2020, it has also been a challenging year for meat producers, with the food category experiencing more than a 10% price inflation throughout the year. As we are now closing on this calendar year, we look at how this upward trend is impacting the holiday season and potentially opening the door to alternative proteins.

Poultry, the most consumed meat globally, has not been exempt from the price volatility recorded throughout the year, rising more than 11% since January. These price increases are set to make Christmas dinner more expensive this year, with the UK Mintec Christmas Dinner Index calculating the cost of an average turkey to be up by nearly 11% from 2020. Reports on price increases vary significantly between retailers and product categories (i.e. frozen whole turkey vs. turkey crown) with the figures ranging from a 2% to 33% increase. For example, Tesco increased the price of their fresh turkey from £22.47 in 2020 to £29.96 in 2021, while Asda increased the price of their medium basted turkey crown from £17.37 in 2020 to £20.85 in 2021. According to the Department of Labour, turkey prices were up by 24% on average compared to 2020 and almost double the price of five years prior. 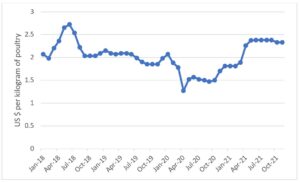 Why are turkey prices up this Christmas?

While the Covid-19 pandemic caused turkey prices to dip to a ten year low in 2020, their price has considerably increased since ‘normal times’ in 2019. Multiple factors are resulting in the global turkey inflation, with the primary reason being high feed costs. With feed accounting for 60-70% of turkey production costs, it is unsurprising that an 8 year high in grain costs, caused by drought conditions resulting in poor harvests and lower yields globally, has led to a significant increase in the price of the final product. In addition, labour shortages have had negative impacts on production this year. The global issue of worker absenteeism linked to Covid-19 has had far-reaching consequences in the meat sector as it requires high levels of manual work to slaughter and consequently debone carcasses, as well as to package the meat. In the US, turkey slaughter rates were down 35% y-o-y in September, with the USDA reporting total turkey slaughter rates were down 6% for the year compared to 2020. In the UK, Brexit has exacerbated worker absenteeism issues, with the workforce depleted as many EU workers have returned to their home countries, and the new points-based immigration system is making it more difficult for those willing to travel to the UK for work. Global supply chain issues have also contributed to turkey price inflation with supply chain bottlenecks, high transport costs and shipping route delays affecting the availability of turkeys in stores.

Fortunately for consumers, while the costs of a traditional turkey have increased, plant-based turkey and other alternative protein prices have largely remained the same. An article by Bloomberg reported that US plant-based alternatives retail on average for $16, with their producers stating that their prices have not significantly changed since 2020.  An analysis comparing the cost of a serving of tofurkey (a soy-based turkey) compared to a serving of traditional turkey in the US was significantly cheaper with prices found to be $0.66 and $1.42 respectively. Demand for plant-based alternatives has increased each year with many people now identifying as flexitarian. Coupled with increased costs for turkey, this may be responsible for the increase in sales of plant-based holiday centrepieces. For example, the Very Good Food Company Inc. selling 35,000 units of their “stuffed beast” this year compared to just 9,000 in 2020. In the UK, retailers have also upped their offering of meat alternatives this Christmas with M&S, Tesco and Co-op selling plant-based turkey. Interestingly, all three retailers have opted for different plant-based proteins; with M&S choosing pea, Tesco favouring wheat and Co-op selecting soy-based protein. M&S’ Vegan turkey roast comes in as the most expensive at £2.50 per serving, Co-op’s Gro Ho Ho Turk’y Joint costs £1.65 per serving while Tesco’s Wicked Kitchen No-Turkey Roast Crown costs just £1.25 per serving. As the cost of plant-based turkey makes it a cheaper option than a traditional turkey, more consumers may be intrigued to try the product, especially as there are growing concerns over climate change, antibiotic resistance and animal welfare.

How tasty is plant-based turkey?

The increase in offerings of plant-based alternatives may attract new customers this Christmas. However, there is no guarantee these choices will be repeated next Christmas unless the products are tasty and can contend with traditional turkey. So far, many plant-based turkeys have had a lukewarm reception, with consumers criticising them on their taste and texture and some reviews of plant-based turkey products calling them unpleasant. The reason for this is due to companies choosing to expand their product offerings and increase production capabilities to capture new customer demand, rather than investing in product reformulation. Unlike other plant-based products, such as sausages and burgers, plant-based turkey does not mimic the fibrous muscle or taste of the real bird. In an interview, Mitchell Scott, co-founder of The Very Good Food Company Inc., confessed: “we are not at the stage where plant-based turkey will be the same as turkey”.

The cost of turkey this Christmas may be off-putting for some consumers and thus it provides a great opportunity for plant-based products to be tried by a wider range of consumers. As climate change continues to affect crop harvests and the impact of Covid-19 lingers, plant-based producers should seize the opportunity to reformulate their products to provide some delicious and nutritious plant-based offerings that can truly rival traditional turkey. However, as it currently stands, few plant-based products are up to the taste test and therefore it may be unlikely that most flexitarians will be reaching for plant-based turkey next Christmas, even if it is the cheaper choice; after all Christmas is a time for indulgence.