The global livestock sector has long been the ‘elephant in the room’ at the UN talks, but this must change if we are to meet climate emissions reduction targets

The food options at the UN Climate Talks in Poland this past week received plenty of public scrutiny. The irony of serving the largely meat-based dishes to the 30,000 delegates was certainly not lost, except perhaps on the organisers.

With livestock production, including meat and dairy, representing 14.5% of all man-made greenhouse gas (GHG) emissions, more than the entire global transport sector.

Recent research firmly shows that adaption around both production and consumption of meat and dairy products can significantly move the needle on emission of pollutants, and that transition of diets to less meat-based and more plant-based products is essential to tackling climate change.

The food system has long been overlooked in terms of serious climate mitigation discussions at COP conferences. In October, the UN’s own climate advisors, Intergovernmental Panel on Climate Change (IPCC), highlighted that global GHGs must be reduced by 45% by 2030 to achieve net-zero emissions targets by 2050. This challenging reduction target is to mitigate some of the most destructive climate change impacts heading towards us in the not-too-distant future. And there is still so much work that needs to be done.

A paper published in the international peer-reviewed science journal Nature, echoes this view in its assessment of keeping the food system within environmental limits. Eating less meat, it concluded, could reduce the GHG emissions of the food system by more than half. Other environmental impacts of the current food system, such as those resulting from the overuse of chemical fertilizers and depleting freshwater reserves, could be reduced by between a tenth to a quarter [1].

The climate risks to livestock sector

According to the UN FAO, extreme weather events cost the agricultural sectors of developing economies US$96 billion in lost crops and decreased livestock production over a ten year period between 2005–2015. Brazil, for example, has been plagued with droughts for decades, posing a serious threat to its standing as a global agribusiness powerhouse. Brazil is currently the number one exporter of soy, beef and chicken by volume — that’s a substantial national profit margin at risk[2]. Brazil-based JBS   the largest meat company in the world by sales–is a perfect case in point. It has already reported a partial shutdown of some operations in the country due to water access issues that are linked to climate change-related impacts [3].

Despite a backdrop of material risk to profits, corporates are still slow to move. FAIRR’s research highlighted that the world’s largest meat, dairy and fish producers continue to be laggards when it comes to managing these potential risks to their operations. At present, the majority of the animal protein producers covered by the Coller FAIRR Indexhave not set any clear reduction targets for their direct or indirect outputs relating to Scope 1, 2, and 3 emissions. Of those livestock companies that do have targets, the majority have only partial commitments relating to emissions associated with their facilities rather than to their core asset   the animals.

More than 480 companies, including nearly a fifth of Fortune 500 companies, are developing business strategies that are aligned with the Paris Agreement goals by committing to develop and subscribe to official science-based targets for reducing GHG emissions. However, as in other climate related dialogue, much of the momentum around mitigation has largely been outside of the agriculture sector.

This is where the FAIRR investor network is prompting discussion and driving change. FAIRR’s work highlights the correlations between meat production and negative environmental impacts, including on issues such as the connection between livestock, global deforestation and GHG emissions.

At COP24, FAIRR presented alongside global corporate, Mars, Inc. and other experts to reinforce the urgency of the issue of deforestation and its link to combating climate change. FAIRR is playing a key role in furthering this discussion by facilitating dialogues between institutional investors, companies and other stakeholders on this issue. In August, FAIRR launched an investor focused Statement of Support to bring awareness to deforestation in Brazil’s Cerrado savanna. Engagement on the Cerrado, an area highly vulnerable to deforestation and conversion of deforested land, is essential to safeguarding the long-term value of institutional investment portfolios. The Statement of Support for the Brazilian Cerrado has more than $6.3 trillion of combined investor support and backing from corporates such as Tesco, Walmart and Unilever, among many others. 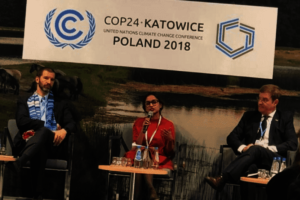 The question now at the final days of the climate talks in Poland is: What real progress has been made? Alongside the IPCC’s message, the World Resources Institute’s warned that the agricultural sector alone would take up 70% of the allowable “emissions budget” to keep the world within 2 degrees of global warming by 2050. Have these revelations added any urgency to the talks?

If the critical coverage of the lunchtime cheeseburgers being served at COP24 is an indicator, we may be in trouble. Governments and policymakers should open their eyes to the elephant in the room and the food on their plates. If they don’t, staying within the 2-degree limit will not be on the menu for very much longer.